Fixed prosthodontics is concerned with restoring teeth using restorations that are fixed into the patient’s mouth. They are typically made in a laboratory after taking impressions (moulds) for the technician to work with. They are also known as ‘indirect restorations’.

Crowns are often referred to as ‘caps’. They cover the remaining parts of the natural tooth when a large amount of structure has been lost. As such, they provide what is known as ‘full coverage’. Crowns can be constructed from many different materials, ranging from an all-metal gold crown, through to a high strength ceramic crown. The type of crown depends on the amount of tooth left, the tooth type and the patient preference.

A more conservative option for a crown is the inlay. It is possible to provide an inlay if a relatively small amount of tooth tissue is missing within the confines of the tooth cusps. The inlay can be made from metals, resins or ceramics.

An onlay is similar to an inlay, but it often covers over the cusps of a tooth. They are particularly useful if the tooth needs to be strengthened or reinforced. They can also be used to make the tooth longer/higher, which is useful if a worn dentition is being built back up again.

Veneers are a relatively thin piece of ceramic or resin that is glued onto the surface of a tooth. They can be used to restore damaged teeth, rotated teeth, or to improve aesthetics. Usually an amount of tooth preparation is required for the veneer to ‘sit into’ but modern techniques allow veneers to be made that stick straight onto the tooth surface, rather like fake fingernails! 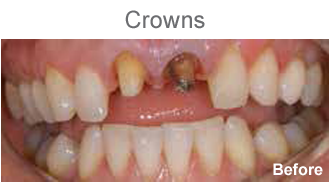 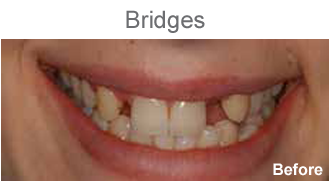